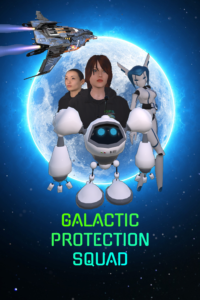 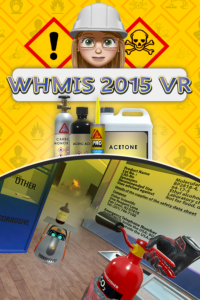 WHMIS 2015 VR is a highly-realistic VR training app (Available on Steam) about how to handle hazardous (e.g., corrosive, flammable, etc.) products and their accidents (e.g., fire, body spill, and eye spill) in workplaces such as a school lab, construction site, and warehouses. WHMIS 2015 VR provides comprehensive information details with over 1200 pages of information about +30 hazardous products.

Galactic Protection Squad | Espisode 1 (GPS-1) is a VR educational game (Available on Steam and Viveport) for learning fraction concepts through a sci-fi escape-room game. In this game, players explore a huge space station with over 16000 square feet in 5 floors and 25 sections/rooms to solve puzzles using Star-Trek-like holographic terminals without any loading bar/screen. In GPS-1, players would experience how beautiful yet fragile are habitatble earth-like planets to find an intrinsic motivation for saving them by understanding their ecosystemic balance through fractions’ concepts.

HeadJoystick is a natural VR travel interface for walking, driving, and flying in Metaverse, which allows users to freely look around and use their hands for interaction during travel

Using handhled controllers for traveling (e.g., walking/running, driving, and flying) in VR intereferes with using our hands to interact with the virtual environment, reduces the believability of travel, and leads to disorientation and motion sickness. To address these challenges, several natural travel interfaces (e.g., driving/flight simulators, walking treadmills, walking in place) have been designed and researched, but they usually can not replace the handheld controllers for major VR users in a wide range of travel scenarios such as flying, driving, and running/walking. Therefore, as my PhD research, I designed several alternative travel interfaces for VR travel and conducted several user studies with different tasks to evaluate them in a wide range of travel scenarios. My research led to inventing a VR travel interface – called HeadJoystick, where the user simply moves his/her head as a joystick handle toward the target direction to control their speed. More than 100 users evaluated and preferred HeadJoystick over handheld controllers in terms of believability, disorientation, motion sickness, accuracy/precision, and several other factors in a wide range of flying, driving, running/walking scenarios. After patenting HeadJoystick interface, now are developing its plugin for Steam VR and Oculus Quest to use it for playing a wide range of VR games and applications. Here are some of our published tasks for comparing HeadJoystick versus Controller:

HeadJoystick’s test for driving in VR (2021)